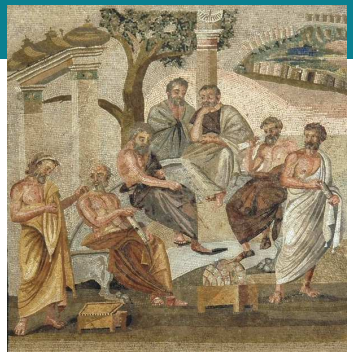 Disagreement and scholarly dispute are essential to any intellectual development. This holds true for ancient cultures no less than for us today. Greek philosophy has been agonistic from long before the formal constitution of philosophical ‘schools’ in the Hellenistic age. In the classical period, Athens famously served as an intellectual battlefield between Socrates and the sophists, in which a full armory of eristic and elenctic strategies was developed. This confrontation was to become a paradigm for the opposition between rhetorical and philosophical models of education, from Plato and Isocrates to the Second Sophistic and beyond.

The Hellenistic age saw the rise of schools and other, often more informal types of network which committed its members to a core set of doctrines – not only in philosophy (Stoicism, Epicureanism, Skepticism), but also in medicine (dogmatists vs. empiricists), science (mathematical astronomy vs. more philosophical cosmologies), historiography (pragmatic vs. rhetorical and tragic approaches; pro-Roman vs. pro-Carthaginian accounts), grammar (allegoricists vs. literalists), rhetoric (asianism vs. atticism), poetry (epos vs. shorter types of poetry), and theology (traditionalist vs. more liberal approaches). An essential ingredient of this phenomenon is the development of stereotypic depictions of rival schools and fixed patterns of refutations. Many of these depictions and tropes survived the actual debates from which they emerged and the schools against which they were directed, as is apparent from the Platonic and Christian texts from late Antiquity.

In the Hellenistic period, we also witness the emergence of new intellectual centers, like Alexandria, and of increasingly text-based scholarly communities and networks. From the early imperial age onwards, authoritative texts became increasingly important vehicles of wisdom, and written commentaries gradually acquired a central place in philosophical, rhetorical and religious education. Both Christians and pagans adopted polemical strategies in distinguishing between orthodox and heterodox interpretations of their founding texts, thus leading to controversy between authors who often had much more in common than they were ready to admit. In this context, polemical strategies not only served to refute one’s opponents, but also contributed to establishing intra-school identity and intellectual alliances.

The aim of this conference is to study the role that polemical strategies and intellectual controversy have played in the establishment of ancient learned networks, such as philosophical and scientific schools, scholarly and religious communities, literary circles, etc., as well as in the dynamics of intellectual alliances, traditions, and ‘personal’ networks.

(Text by the organizers)

If you would like to participate, please register online before November 28, 2018.

15.15 – 15.45 Marco DONATO (Pisa & Paris), Polemics in the Pseudoplatonica: The Academy’s Agenda and the Renaissance of Socratic Dialogue

16.45 – 17.15 Chiara MILITELLO (Catania), Replying to Stoics as the Basis of True Aristotelianism: the Significance of Polemics in Alexander of Aphrodisias’ Commentaries and Treatises

09.00 – 09.30 András HANDL (Leuven), The Influence of Real-Life Encounters on the Treatment of Heterodox Groups in the Refutatio Omnium Haeresium

09.30 – 10.00 Benjamin DE VOS (Gent), The Homilistic Disputes Between Clement and Appion: the Art of Dissimulation and Irony in a Clash Between Judeo-Christianity and Paganism for the ‘True’ Paideia

Peter GEMEINHARDT (Göttingen), “Against the Avarice of the Melitians and the Impiety of the Ariomanites!” Polemics and Networking in the 4th-Century Trinitarian Debates

14.00 – 14.30 Olivier DEMERRE (Gent), Philostratus’ Life of Hermogenes: Rhetorical Debates and Circles in the Lives of the Sophists

15.30 – 16.00 Eva FALASCHI (Pisa), It is not just a Question of Being the Best. Artistic Rivalry and Polemics Among Greek Artists as Seen in the Imperial Age

09.00 – 09.30 Irini FOTINI-VILTANIOTI (Leuven), Porphyry’s Solution to Plato’s and Aristotle’s Controversy on the Tripartition of the Soul in On the Powers of the Soul Fr. 253 Smith