Religious Conflict from Early Christianity to the Rise of Islam 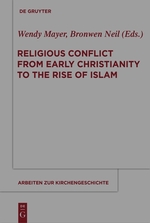 Religious Conflict from Early Christianity to the Rise of Islam

Conflict has been an inescapable facet of religion from its very beginnings. This volume offers insight into the mechanisms at play in the centuries from the Jesus-movement’s first attempts to define itself over and against Judaism to the beginnings of Islam. Profiling research by scholars of the Centre for Early Christian Studies at Australian Catholic University, the essays document inter- and intra-religious conflict from a variety of angles. Topics relevant to the early centuries range from religious conflict between different parts of the Christian canon, types of conflict, the origins of conflict, strategies for winning, for conflict resolution, and the emergence of a language of conflict. For the fourth to seventh centuries case studies from Asia Minor, Syria, Constantinople, Gaul, Arabia and Egypt are presented. The volume closes with examinations of the Christian and Jewish response to Islam, and of Islam’s response to Christianity. Given the political and religious tensions in the world today, this volume is well positioned to find relevance and meaning in societies still grappling with the monotheistic religions of Judaism, Christianity, and Islam.

(Text by the editors)

Early Christian Polemic against Jews and the Persecution of Christians in Rome by Nero – McLaren, James S.

Conflict in the Canon: The Pauline Literature and the Gospel of Matthew – Sim, David C.

Rewriting: The Path from Apocryphal to Heretical – Piovanelli, Pierluigi

Inter-City Conflict in the Story of St Michael of Chonai – Cadwallader, Alan H.

Media Manipulation as a Tool in Religious Conflict: Controlling the Narrative Surrounding the Deposition of John Chrysostom – Mayer, Wendy

Christian-Jewish Conflict in the Light of Heraclius’ Forced Conversions and the Beginning of Islam – Gador-Whyte, Sarah

The Earliest Greek Understandings of Islam: John of Damascus and Theophanes the Confessor – Neil, Bronwen

Index of Names and Places